Prayer for our holy father 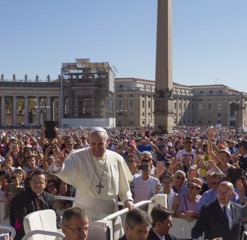 God our Father, shepherd and guide, look with love on our holy father Pope Francis I, your servant, the pastor of your Church. May his word and example inspire and guide the Church, and may he, and all those entrusted to his care, come to the joy of everlasting life. Grant this through Christ your Son. Amen.

Some people have tried to sully the reputation of Pope Pius XII as a great defender of the Jews. In reality nobody did as much for the Jewish people during the Nazi regime as Pope Pius XII. Prominent Jews who were witnesses of what really took place had a completely different opinion of the pope.

Chim Herzog, who later was the first president of Israel, wrote in 1943: The Holy See is lending its powerful help, whatever it can to mitigate the face of my persecuted coreligionists.

Chief Rabbi Isaac Herzog stated in 1944:  The people of Israel will never forget what His Holiness is doing for our unfortunate brothers and sisters in the most tragic hours of our history, which is living proof of Divine Providence in this world.

Moshe Sharett, who later became prime minister of Israel, met with Pius XII at the end of the war. He reported: I told him that my first duty was to thank him and through him the Catholic Church on behalf of the Jewish public for all they have done in the various countries to rescue the Jews.

We are our brothers' and sisters' keepers

Remember, Jesus told each of us: Whatever you do to the least of My brothers, you do it to Me.

Have you recently helped another person, not necessarily a family member? Today this includes Syrians, Kurds and Copts.

Our world is so difficult. We must pray that the walls between people and groups fall and that each of us grows in love and freedom to discover true solidarity among human beings. (Jean Vanier)


Return from Holy Father to A Prayer Book

Prayers for our priests