This great worship hymn of Mary is called the Magnificat because it begins in the Latin Bible in verse 47 with the words "Magnificat animum mea Dominum," which means "My soul magnifies the Lord."

My soul magnifies the Lord and my spirit rejoices in God my Savior
For He has regarded the lowliness of His handmaid.
For behold, from henceforth all generations shall call me blessed.
For He that is mighty has done great things for me; and holy is His name.
And His mercy is on them that fear Him throughout all generations.
He has shown strength with His arm, He has scattered the proud in the conceit of their hearts.
He has put down the mighty from their thrones, and has exalted the humble.
He has filled the hungry with good things; and the rich He has sent empty away.
He remembering His mercy has helped His servant Israel;
As He promised to our forefathers, to Abraham and his children forever. (Luke 1:46-55)

The Catechism of the Catholic Church describes the Magnificat as "the song both of the Mother of God and of the Church." 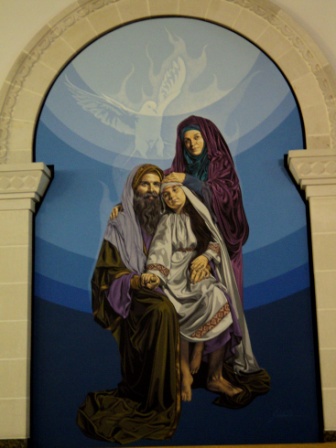 Return from Magnificat to Home Page

Our Mother of Perpetual Help